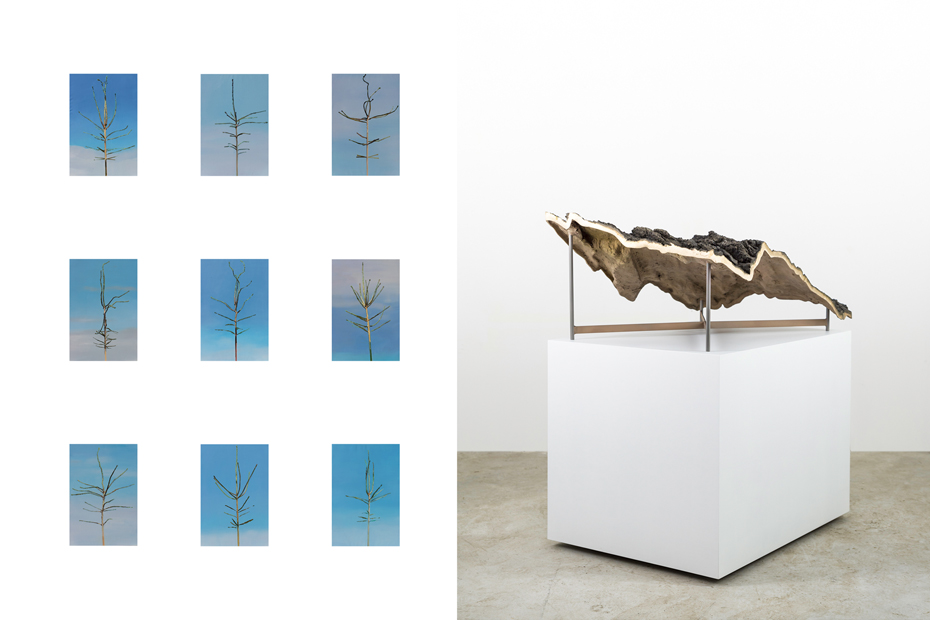 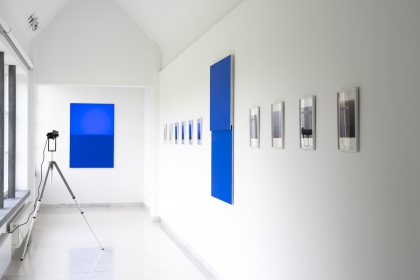 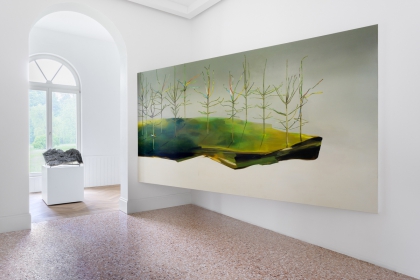 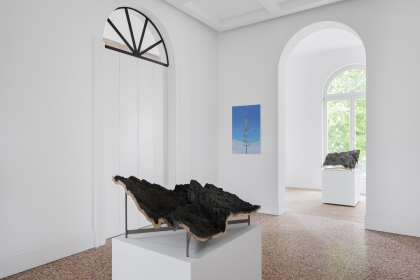 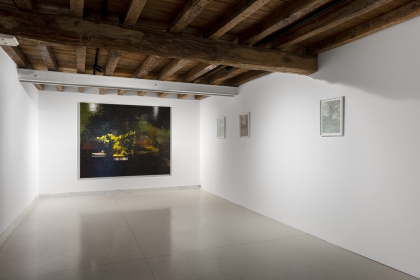 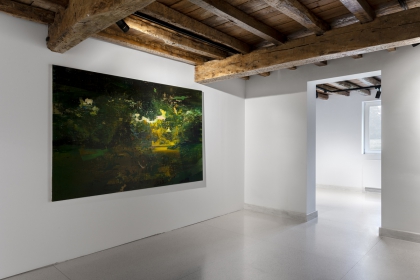 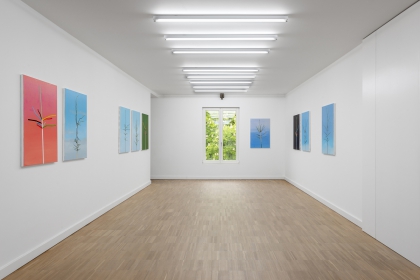 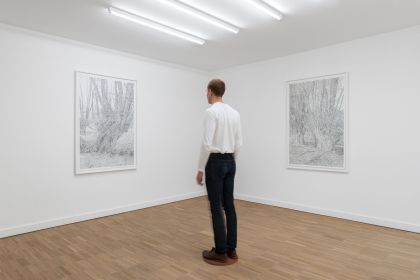 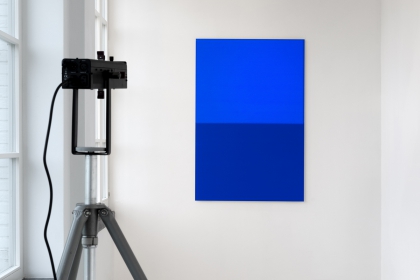 The exhibition Intersections is not only about the tangents in the work of Stijn Cole and Greet Van Autgaerden, since ‘intersections’ can also be interpreted as the ‘intersecting lines’ that run diagonally through the horizon of the classical, pictorial landscape. We have come to understand that complex interactions in the earth’s ecosystems stretch far beyond the ‘horizon’. For example, the carbon dioxide in the atmosphere dissolves in the water of the hydrosphere, makes chemical compounds in the biosphere (e.g. in shells), before finally returning to the atmosphere via volcanoes in the geological sphere. The artist-researcher Loek Grootjans also discovered the ‘transversal’ in the various spheres and layers of the landscape. He claims that Mondrian was able to see and paint such beautiful, scintillating seascapes at the beginning of his career, while in Domburg, due to the presence of sparkling salt crystals in the air, which had emanated from the sea currents in the warm weather. Such observations help us to evolve and deepen the image that we have of the natural world. Thanks to the work of Greet Van Autgaerden and Stijn Cole, our fantasies about nature acquire a fresh form. They create new ecologies and ‘intersections’ in our thinking.

In Stijn Cole’s well-known ‘colourscapes’, the coloured squares seem to vibrate on top of the grids. This is partly because the thickly applied paint appears to escape from the confinement of the squares. Cole often starts from a landscape photograph that is reduced by his image processing software into a colour grid of 16 by 16 squares, or 256 colours. This is reminiscent of early computers and their limited colour options, and a time when tonal nuances were a luxury. On this low-tech ‘colour reduction’ the artist then applies more complex brushstrokes until, as he himself says, it ‘begins to work’. In this sense, the grid – which he sees as a reference to the framing of art – resembles a sieve through which he sifts the different wavelengths of light into the materiality of paint, whereby the vibration of light continues to resonate with cleverly placed touches of relief and dabs of paint. In the spatial work ‘1:1’, Stijn Cole places a disc in the gallery at the exact spot from which he photographed willows in the landscape through a wooden frame. These photographs are then drawn on a scale of 1:1, and in pencil because it commands even more attention than the original photograph. Via the disc in the gallery space, the artist changes his position with the viewer. In this way, Cole places his own unique emphasis on scale, perspective and the importance of relationships within the perception of landscape. Cole’s extremely varied landscape work also includes ‘sampled’ surfaces of landscapes in which rock formations are moulded with silicone and cast in bronze. Here too, he will often use a kind of frame with fixed dimensions. The marks on the paper of Stijn Cole’s colour grids are reminiscent, on the one hand, of the classical fieldwork with the easel, but the notes beneath seem to be the reflections of a scientist. Stijn Cole’s work seems to hover between the two, as though he is preparing his own intriguing ‘hypothesis’ that, in all probability, could never actually be substantiated.

Greet Van Autgaerden often works around the boundaries, overlaps and intersections between the artificial and the natural. The borders between ‘real’ and ‘artificial’ nature have completely dissolved in our contemporary surroundings and the landscape. This is due to breeding, genetic manipulation, domestication and other human influences. In the series entitled ‘Intersections’, Van Autgaerden paints three more abstract landscapes in which, amongst other things, the colour referencing samples for a fluorescent lamp are incorporated. These demonstrate how ‘accurately’ the lamp can reproduce certain colour tones. Greet shows that the natural light waves that colour a bush green (Intersection #4) go far beyond this limited frame of reference. These works explore the relationships between the limitations of artificial light and the whole complex colour universe that is inherent within the landscape. In the series ‘Picea abies’, the artist explores the tops of spruce trees and their morphology. During a bicycle tour in the High Fens, she discovered a separate group of spruces which – despite being packed together – were extremely distinctive. This was mainly due to the erratic position and direction of the branches. By placing the spruce tops individually and centrally in front of a classic blue sky, Van Autgaerden alludes to portrait painting while also highlighting their individuality. By showing the tree tops together in a series, a certain ‘organisation’ seems to emerge in the criss-cross of branches. As if a strange choreography has arisen throughout the sequence. In this choreography, Van Autgaerden shares her fascination for the underlying organisation or the mathematical ‘building plan’ of the spruces. This differs greatly from the classic, symmetrical and serrated outline of the ‘Christmas tree’ that we have known since childhood. Like Goethe, D’Arcy Wentworth Thompson and Benoit Mandelbrot, Van Autgaerden is fascinated by the similarities that we discover in different places and on different scales in the micro and macro-cosmos. In this manner, Greet dives into the DNA of the landscape in a formal and artistic way. Like Stijn Cole’s oeuvre, Van Autgaerden’s work goes beyond the normative aesthetic dimensions of the classical natural landscape, in which a perspective dominated by man is reversed and where the boundaries between people, beings, nature and things are completely broken open.