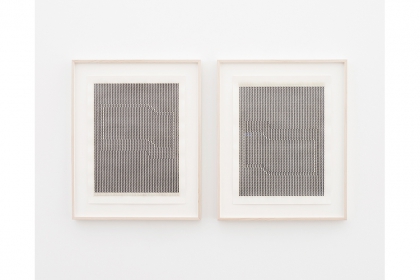 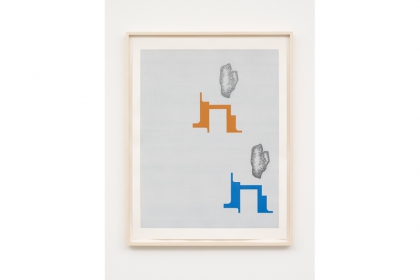 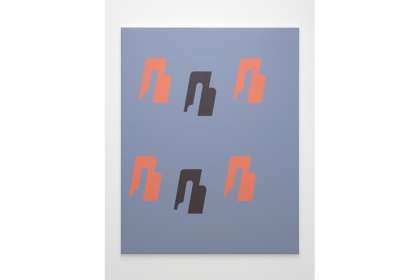 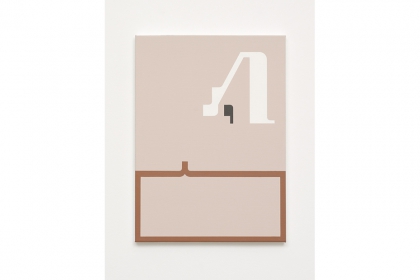 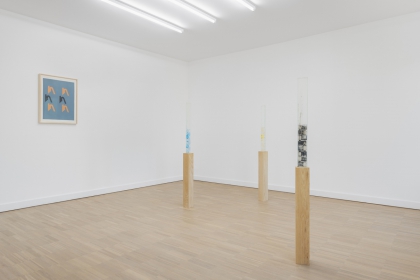 1.
The work of Carlos Caballero feels like a miniature universe, a world where everything seems in sync except that we - as spectators - will never be able to fully grasp it. In this whole, every painting, every drawing functions as a world unto itself. The contours of the canvas and the paper appear - without fault - to form the outer limits of the works. They keep the planes and figures together like islands and their inhabitants. Protected from the outside world all the elements are kept in check on the canvas and never venture "over the edge". The works suggest a spelling, grammar and vocabulary used to tell stories. Reminiscent of hieroglyphs or cave paintings they appear to portray contemporary or future mythologies looking for fundamental and universal themes that go beyond generations, cultures and languages.

2.
Paper and canvas. Like inseparable, indivisible allies they are entwined in the subdued oeuvre. The extremely detailed works on paper, unmistakably showing the hand of Caballero, exude both calm and intensity. At first view, the repeating shapes appear to be the result of some sort of printing technique, or some sort of stamps, but upon closer inspection they are the result of skillful hands and pencils. Like monks copying manuscripts, Carlos's manual repetitions are minute build-ups of concentration. They endow the work with a special status of preparation, truly different from the classic preparatory drawing; the sketch. Where the multitude of elements is still crucial for certain works on paper, the paintings are relieved of all excess. On paper those multitudes build up a near-stable whole, while on canvas it's exactly the excess of even color planes and negative spaces that give them their intensity. Like a sculptor, Carlos Caballero reveals just enough to fill the void of the canvas with meaning.

3.
Through the triple layering of primers, planes and figures the works relate very directly to classical painting. The figures find themselves always on top of the planes, which in turn find themselves always on top of the primer. Background, decor and characters. However abstract the works may seem, they depict almost concrete stories, amidst abstract landscapes, in a language still unfamiliar to us. An invitation to be read, without handing over the key. In the works on paper Caballero applies grids, sometimes filled with a large number of small, identical symbols. Like a jazz musician, he follows a fixed pattern where he discovers exception upon exception. The detailed grids show figures coming from deviations of a near-digital system, referring both to pixels and code as to carved, or engraved symbols. Symbols that return as autonomous shapes in the paintings and in some of the drawings. They are rigid and sharp, just as the color planes, in contrasting colors to oppose the planes they manifest themselves on. In addition to the linear and squared symbols, a second group of figures occupy the work; the amorphous stains. Either painted dry and slightly transparent or drawn with graphite, they represent chunks of material; skin, textile, rocks. Unlike the symbols that seem to float somewhat above the background, like a framework or window, the stains, in all their lightness, evoke the idea of mass. Quite often these symbols and masses are repeated as well. The duplicated amorphous masses appear as ghosts of themselves, the symbols almost as twins. They all resemble echoes of untold storylines or of abstract ideas and resonate like expanding water ripples against the edges of the canvas. Elusive, they attribute meaning to the planes and voids, floating above the depths of the canvas.