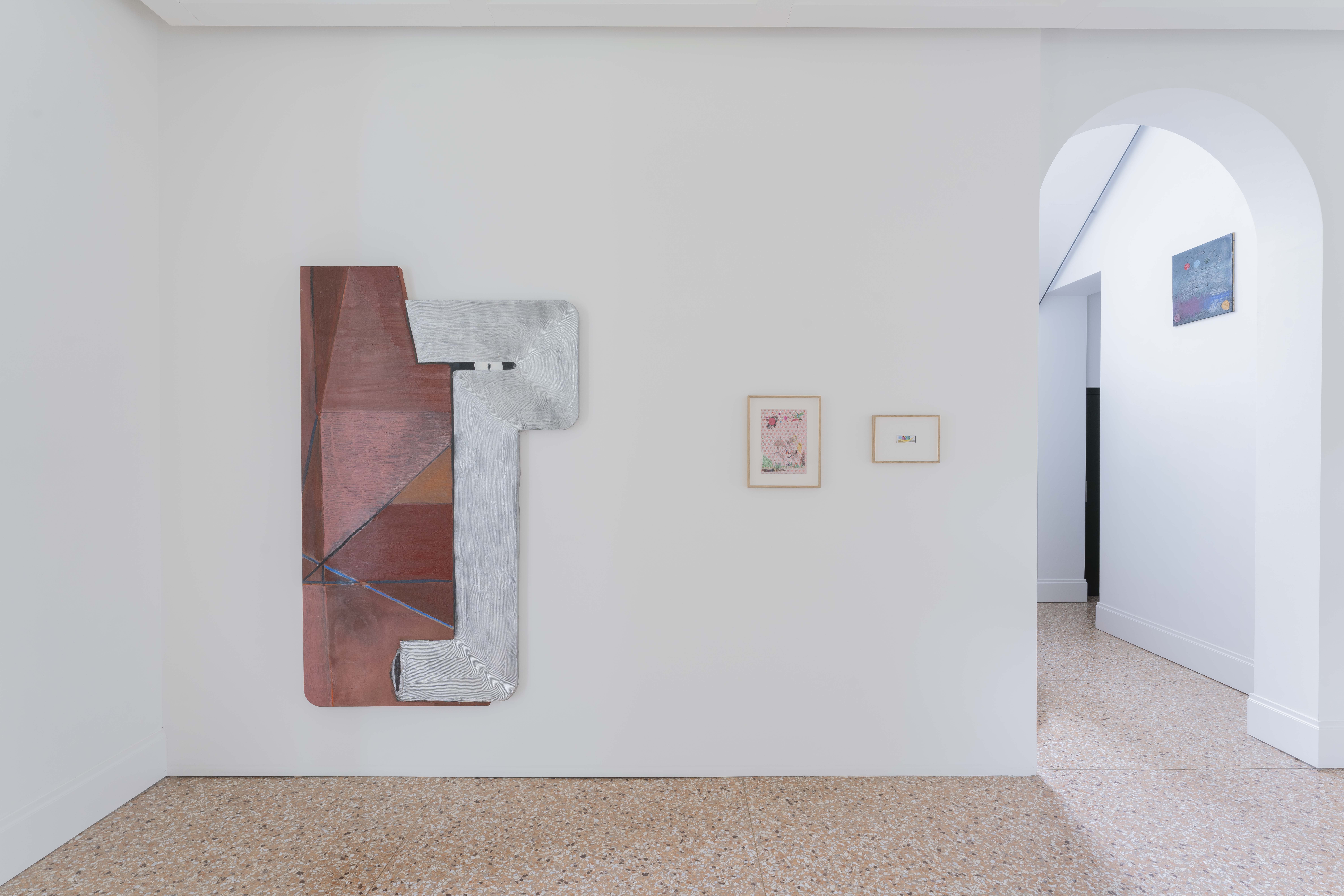 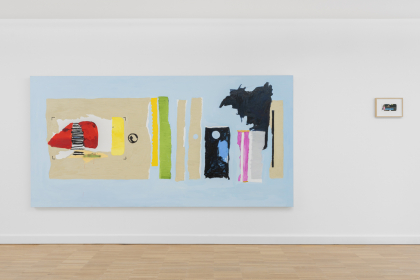 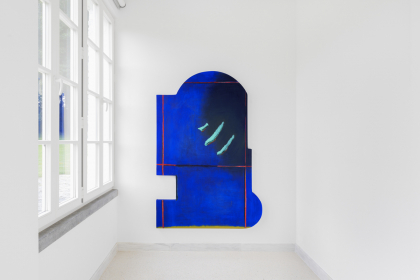 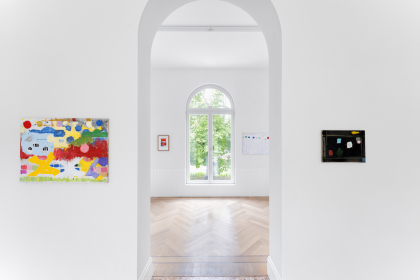 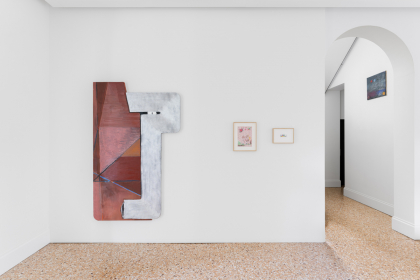 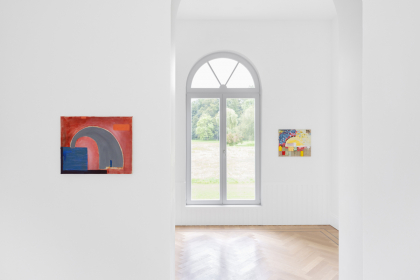 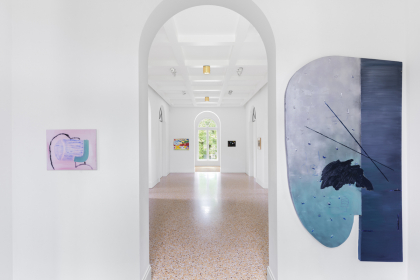 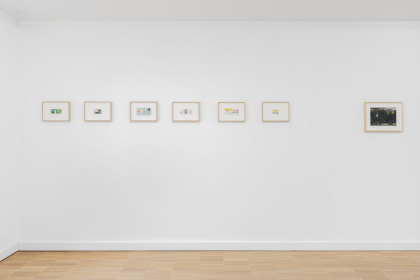 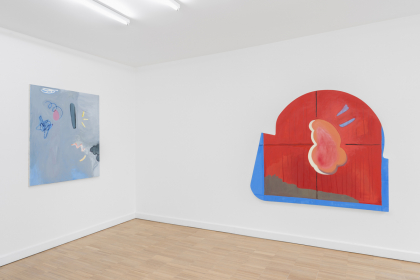 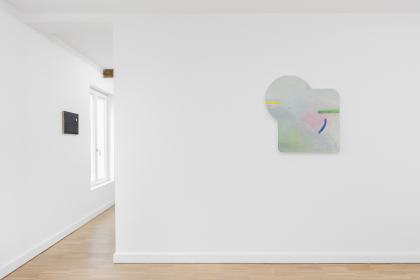 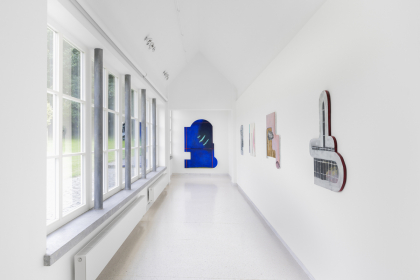 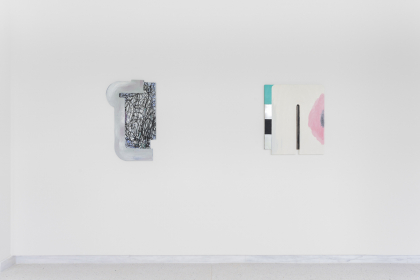 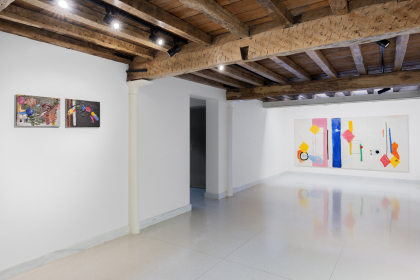 In the 1990s, art historian Yve-Alain Bois described the radical innovation in Matisse's work. He argued that the amorphous interplay of lines and circles of fluid figures, in paintings such as Le bonheur de vivre (1905-06) and Dance II (1910), introduced a kind of dynamism that prevents one’s gaze from arresting. More than the image, Matisse was concerned with composition, scale and experience: "It's the tennis racket-like tightness of the canvas that keeps the eye from penetrating the painting and coming to a halt; it rather says 'keep moving, keep moving!' ... which expresses the centrifugal force of Matisse's work."1 This emphasis on the totality of the canvas and the dynamic, physical viewing experience surpassed 19th century Intimism painting and would also inspire experiments with space and the shaped canvas in post-war painting.

Since 2018, Joke Hansen has made 'conventional' paintings and shaped canvases, both of which involuntarily remind us of Bois’ description.. As a follow-up to the centrifugal force and spatialization of modern and post-war painting, her works on panel and canvas direct and guide one’s gaze, bring it to a halt and then entice the viewer again to perceive the work in a different or more 'free' manner. For example, a number of more 'traditional' works are intersected by a snakelike Figure or twisting motion, which dominates the composition and guides the viewer from start to Finish (often from bottom to top). Then the eye wanders off and is able to scan other, often more organic and varied, elements and levels of the canvas, such as the blue colorfield and amorphous pasty deep red and brown islands in Asphalt (2016), or the gesticular white colorfield in Bat (2019). (“The idea is to get lost," Matisse said of his work.) Other paintings are divided into (partially invisible) grids, labyrinths dotted with obstacles such as clouds. In Tennis for Two (2019) or Maze (2020) the viewer's eye 'bounces' back and forth between amorphous pink clouds and the edges of the labyrinth, much like in a game of ping-pong or Pacman. Subsequently, the washed shades of the black and grey colorfield demand all the attention. Seeing these works, which are inspired by the top-down view of children's play carpets and video games, is compelling and at the same time playful.

The shaped canvases display analogous elements and apply the edge of the frame as an additional strategy. Similar to an urban circular system, with traffic jams and the chaotic city edges, the shaped canvas highlights and guides a viewing experience that shifts between tension and release. A push and pull of winding tubes, pipes and cigarettes, regular and irregular grids, smoke and clouds, eyes and an abstract vocabulary of stripes, twists, dots, fields and blobs. In U-turn (2018) or Undercut (2020), one's gaze literally makes one (or two) bend(s), returning to the beginning and then scanning the peripheral and more expressive color planes. Gravel Pit (2020) follows a curve, like a stream of water or a wave that vaporizes. And in Mogwai (2020), Fast Draw (2020) or David (2018), a grid or doodled field of circles and loops is demarcated by a thick, gray or silver winding tube along the frame's curved edges. Black, yellow, red (2021), shows a bent cigarette and a plume of smoke that clouds the grid in the back: possibly an allusion to fluidity or the impending 'dissolution' of the Belgian State? Despite the associations evoked by the titles or the use of motifs and colors, Hansen's works deal with similar themes. Both in and outside the field of painting, they all share a dialogue on topics like fixed and flowing, straight and crooked, control and freedom.

The work of Maxim Renard, too, is indebted to modernist painting and Bois's description: a painting not as an image but as an analogy or 'model' of reality.2 Renard creates collages of a modest size, with found paper shreds, decorative patterns, pieces of cardboard and fabric, plastic straps and closures, paper clips, logos, parts of torn publications or packaging and QR codes. He disregards the attached memory of these objects or the way in which they, as a collection or organization, allude to an over- organized world, also referenced, for example, in Benjamin Verdonck's found collection of roundels and strings. Renard much rather explores their repurposing and revaluation in (and as) compositions. The works result out of a step-by-step collage process that can take up to several hours, sometimes even days or weeks. For the artist, this process evokes a sense of 'intimacy': a constant manipulation and rearranging of image fragments in his studio, an expression of attention, time and proximity.

Renard tries to capture a similar intimacy in his paintings by recreating the compositions in the form of large-scale paintings, sometimes using a photographic projection. The paintings however are not realistic copies. Renard sees them as 'second degree' expressions of an analogue, materialistic relationship to the world, as expressed in the process of selection and arrangement. Vsevolod Garsjin (2021), after the Russian writer, shows abstract forms in various, brilliant colors, sharply set against a white backdrop. The forms shift between pasty and soft, often fraying and occasionally sharp. Their relatively brutal juxtaposition on canvas recalls the individual shapes and colors of the collages. I Promised You Sunshine (2020) depicts vertical, thin and sometimes perforated paper strips as a group of color bands, arranged side by side. The visible corners of a QR code and a recycling logo on the left suggest the process of enlargement and imitation of the collages. However, these elements also evoke associations with the reuse of images and materials, a mixture of objects and signs, forms and meanings.

In my opinion, Renard's translation from small to large format, collage to painting, 'intimate' to 'public' is proof of kinship with Joke Hansen's work. Both artists regard painting as continually working with painterly elements, structure and composition. At the same time, through movement/fluidity (Hansen) and time/scale (Renard), their paintings demand an attentive and patient viewing. In both cases, painting is not about 'reading' and conceptualizing but deals primarily with evoking associations and meanings in (and through) the act of careful perception.