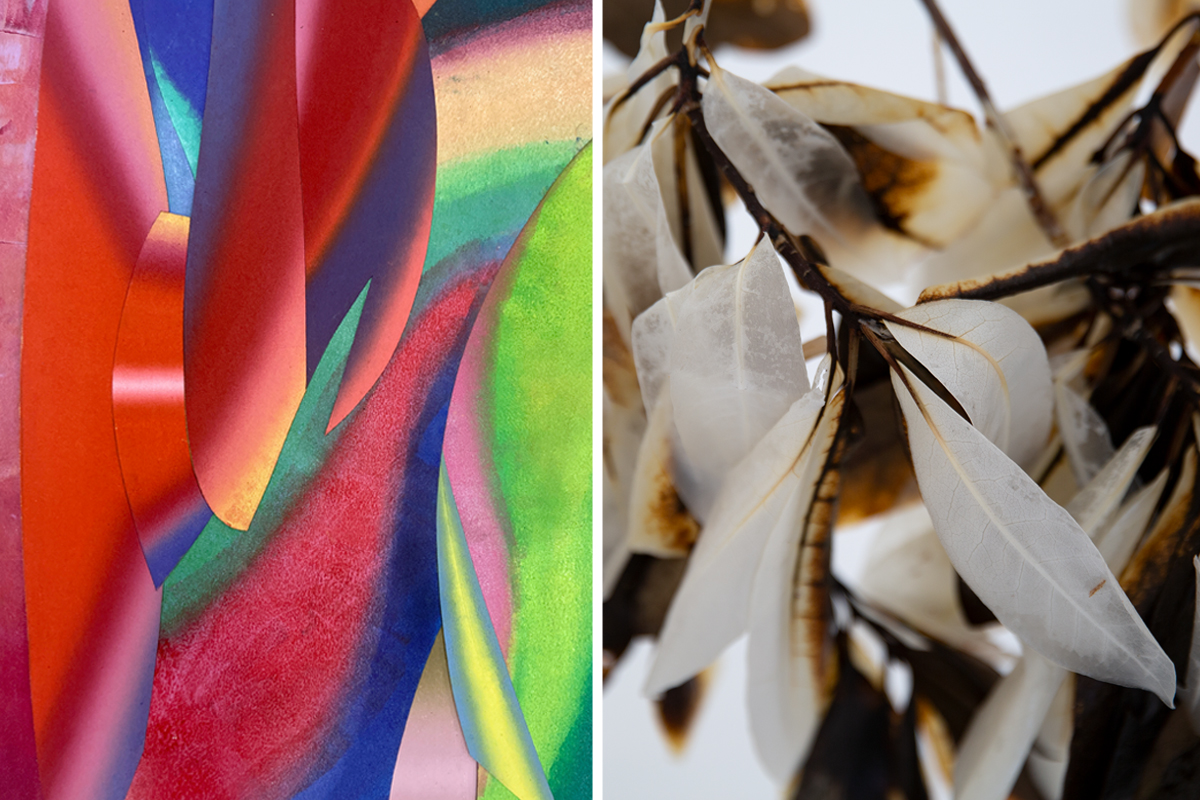 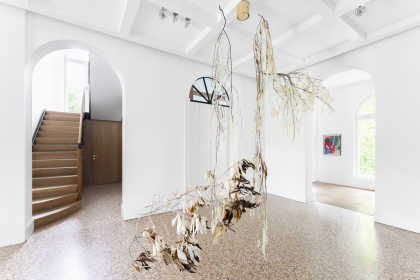 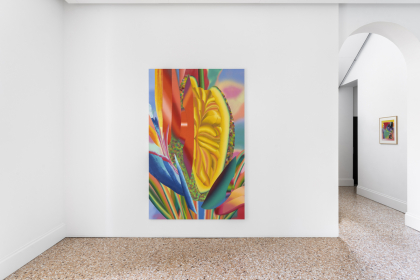 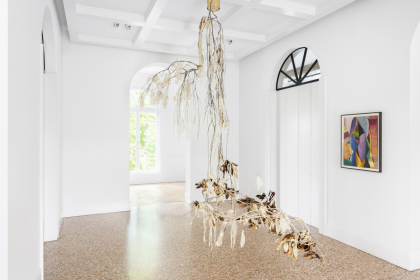 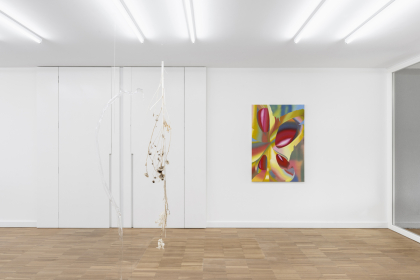 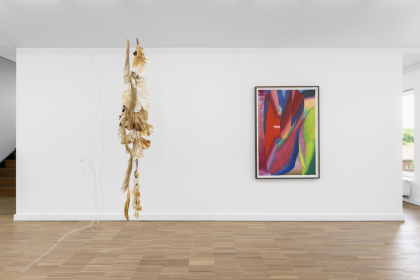 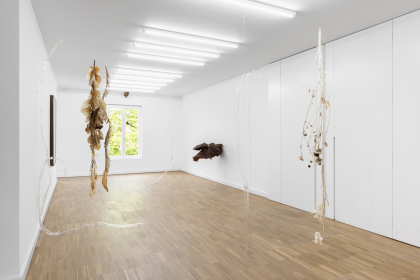 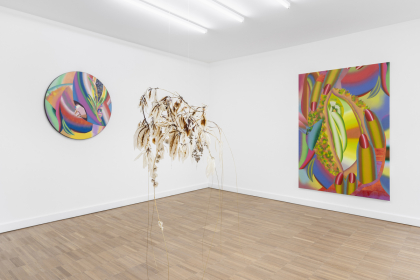 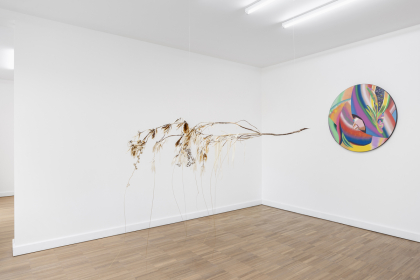 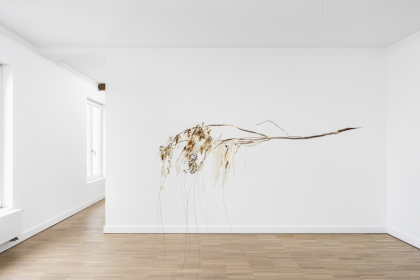 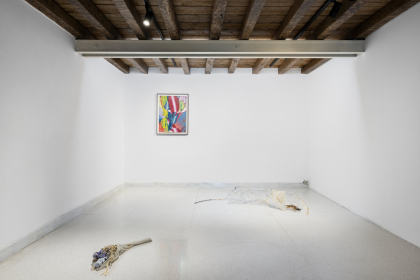 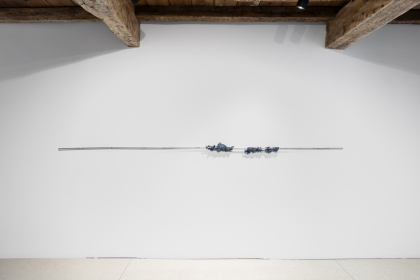 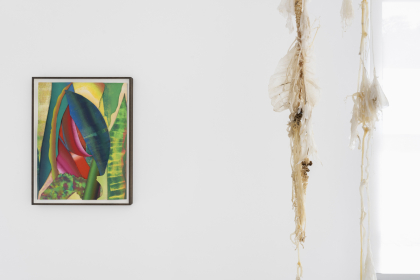 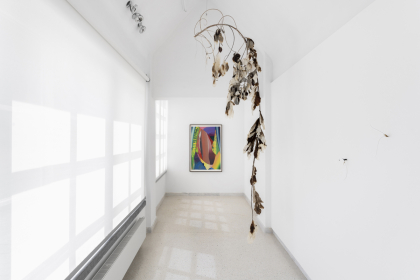 In recurrent effervescence, the Whitehouse Gallery brings together the work of two artists whose visual language is indebted to nature. Both steal forms from plants, either recovering or imitating organic material, and they create works that seem to be dying or depict a renewal of energy. A duality that is also reflected in the title of this exhibition, recurrent effervescence, which alludes to the concept of collective effervescence that was invented by the sociologist Émile Durkheim as early as 1912. This principle describes a shared or collective experience of a movement or moment. Nowadays, it might refer to the feeling of joie de vivre that arises from a social event, such as a festival. We might find a ‘recurring effervescence’ in the natural forms of spring blossoms, but also in a social context. Just think of the cultural sector’s revival, the thriving nightlife, our physical freedoms and being able to breathe without a mask.

Both Emmerich’s and Vanello’s works include plants, fruits and body parts that seem to transform themselves and know no boundaries. They appear to effortlessly develop into new forms in a liberated universe in which the objectified one-dimensional gaze is both challenged and seduced by nature’s resilience.

Hadassah Emmerich presents new works in which erotically charged images fuse with ornamental forms and exotic patterns. Her recently developed collages are composed of relics of stencils cut from vinyl, which have been her faithful companions in the creation of both paintings and large-scale murals for many years. These collages conceal an exotic imagery that is no longer explicit and, through the linear abstraction, evokes Georgia O’Keeffe’s hypnotic flowers and Mexican landscapes. Colourful lush compositions emerge, brought to life by the growing accumulation of tangible layers. These painted scales lure and intimidate the viewer like imperishable peacock feathers that symbolise freedom and eternal life.

We see a very different kind of vitality in the work of Luca Vanello. Born in Trieste, Italy, he trained in London and Berlin, and now has a long-term studio in Brussels. As a resident at HISK, he graduated in 2020 with a total installation in which he freed lifeless matter from gravity by staging it weightlessly in space.

His sculptures and large-scale installations are carefully constructed from a combination of natural elements – such as branches, leaves or even pheromones – with steel chains and plastics, including melted 3D printed devices used in the life science industry, melted PETG and even animal prostheses. The transformed plants that typify his practice have been stripped of their colour via a special process that removes the chlorophyll. Chlorophyll is a naturally occurring green pigment that is essential to the life cycle of many plants, by removing the artist wishes to create a pause in the cycle of the plant. The magic lies in the combination of these various media, each of which gives birth to a new kind of organism and creates a field of tension between organic and synthetic matter. In a highly visual way, these artificial parts attach themselves like fungi and moulds to a surface that is alien to them. This self-reliant force insinuates a static yet endless growth process.

Following recent exhibitions at the Watou arts festival (Poperinge) and the Extra City art gallery (Antwerp), Vanello is now also presenting smaller sculptures in dialogue with paintings by Emmerich. Just like Emmerich’s human body, each artwork seems to be in a constant process of transformation due to its surprising composition and unique appearance. The artworks are like bodies in which intertwined materials meet, change and mutually evolve, both conceptually and materially. Ingredients that can somehow be linked to themes such as automation, sustainable chemistry and renewable energy. The last few decades have been defined by an unprecedented evolution in material diversity, which has impacted favourably on human life expectancy and the health sector in general. At the same time, it cannot be separated from the impact on nature and the depletion of our raw materials. This dilemma – between a stagnant policy and the climatic conditions of our era – comes to the surface in the exhibition through the lack of colour on the one hand, and its excess on the other. In dialogue, Emmerich and Vanello relate natural and artificial life to the social and ecological injustices that typify the world today. This metamorphosis is represented by works that exude fertility and a vibrant desire to thrive without worry, a feeling that is becoming stronger and more precious in an unstable world in transition.