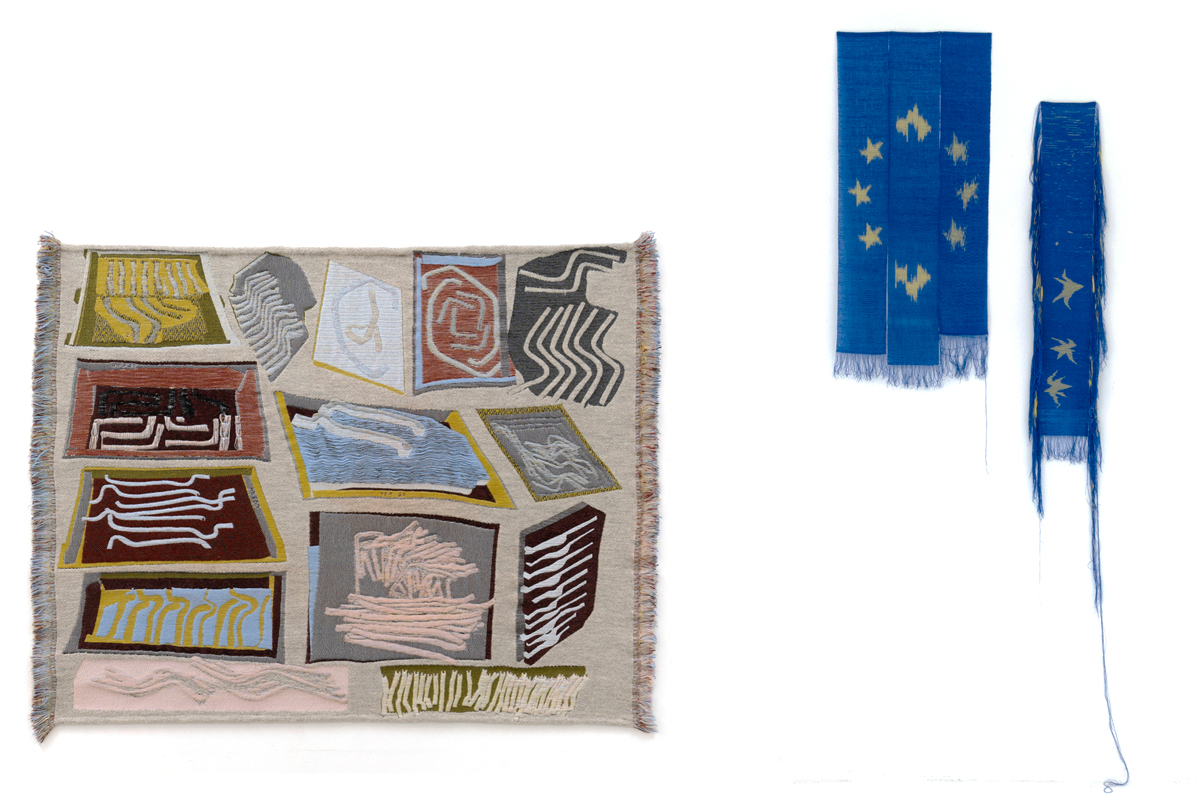 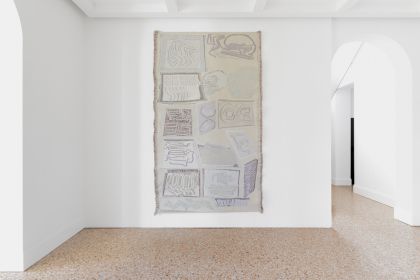 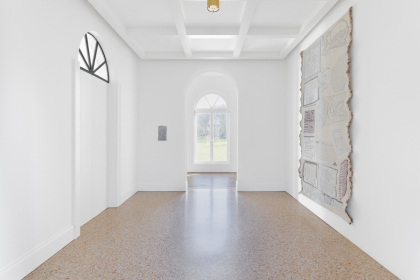 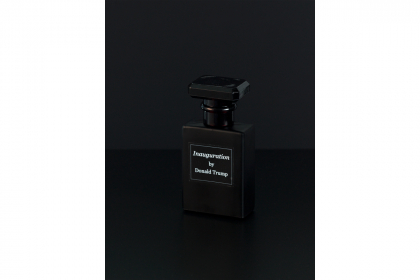 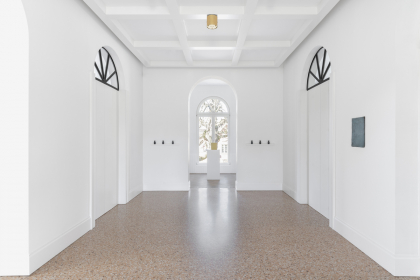 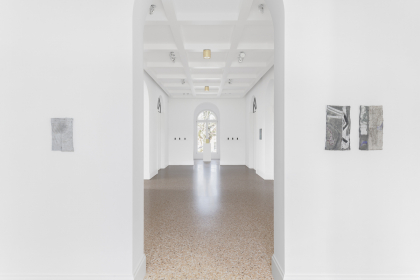 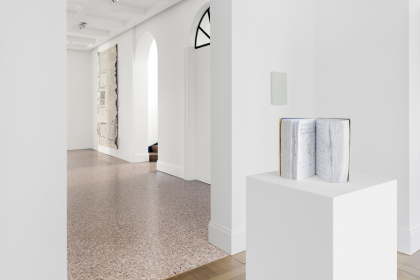 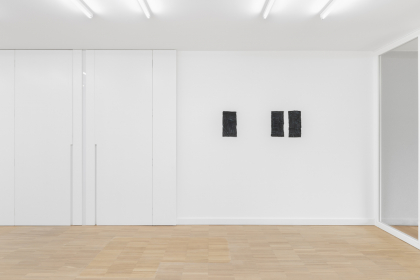 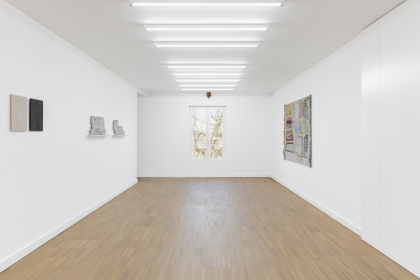 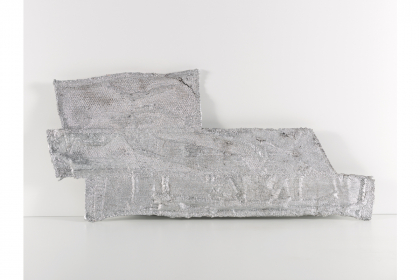 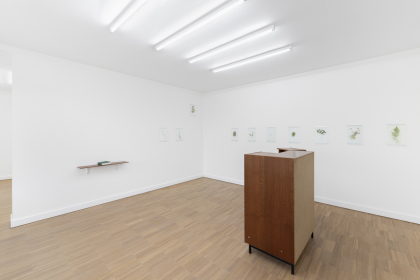 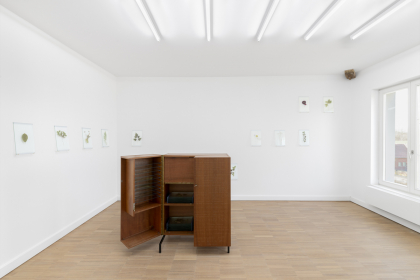 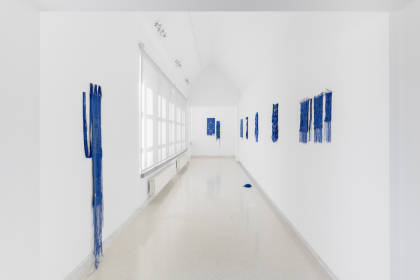 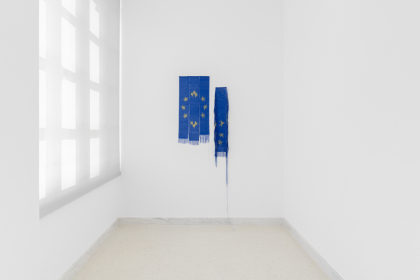 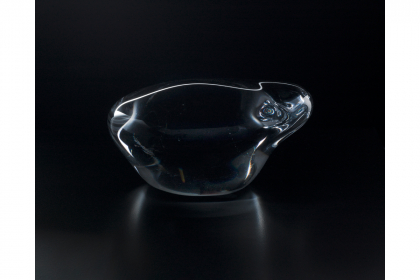 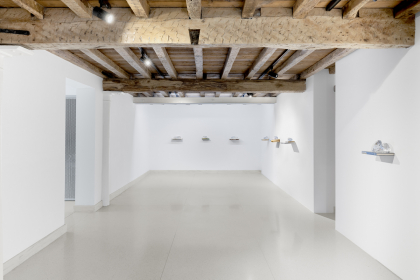 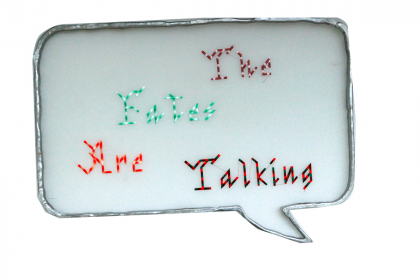 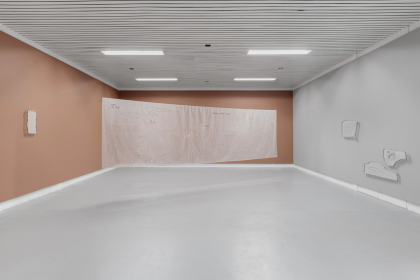 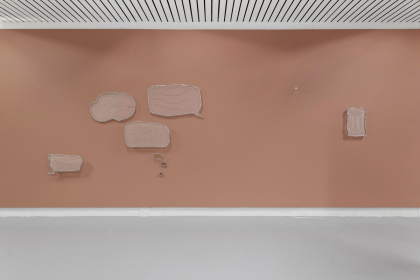 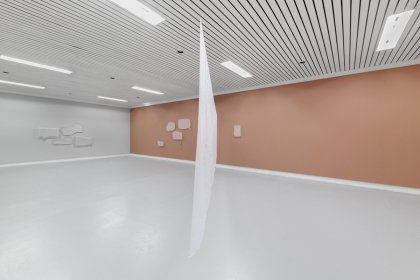 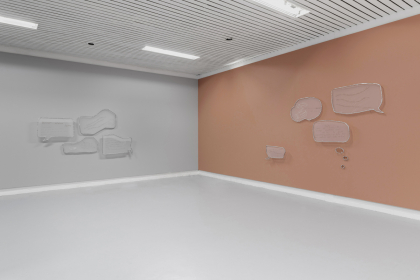 Stéphanie Baechler (°1983) describes herself as a visual artist who moves between textile and clay. She left the fashion industry to completely devote herself to her own work. The fashion and textile industries are very ephemeral, very fast. Baechler turned things around and started working with clay: an ancient and strong material. In the contrast with the rigidity of the ceramics, textile also found its way back to her practice.

Her practice is similar to an endless weave: one work often seamlessly flows into another. Two large tapestries are inspired by a photographic collage of packing material, which she created especially for another work: a series of whimsical ceramic sculptures. The special shapes create a playful pattern, which also comes into its own through the use of several carefully selected textures.

The use of bronze and aluminium is new for Baechler. She learned how to work with them during a recent residency in Switzerland. While making the tapestries, there were many test weaves – she converts those into wax, bronze with a black patina, or aluminium. The fragments are deconstructions of a whole that was already assembled from loose elements: the several boxes containing ceramic works. The conversion of textile into a more static material is not new to her: in her earlier textile works she was already interested in ‘freezing the movement’: a momentary snapshot of a movement. In a similar way she chooses to treat clay and other materials as threads and, inversely, to ‘freeze’ the treatments of the clay in more traditionally art historical, indestructible materials.

The starting point for this new series of works is an expression of care – the unique and especially created packaging for extremely fragile ceramic sculptures. Baechler has learned to treat her works with exceptional care. The contrast between the softness and protective aspect of textile and the hard, cold (yet malleable) clay, and now bronze and aluminium too – other ‘fire arts’ – forms a thread throughout her practice.

The Fates Are Talking

In Whitehouse Gallery’s Project Space, Baechler presents her newly developed work ‘The Fates Are Talking’. “Now you even become the words I was afraid to use,” she says in her letter ‘Dear Line’, published in her first book last summer. The line plays a fundamental role in her practice: as a thread, as a pencil line, as a basic shape for the clay when it comes out of the extruder, and now also in the form of language. The fact that text appears in her work is hardly surprising: ‘text’ and ‘textile’ both descend from the Latin word ‘texere’, which means ‘weaving’.

The three Fates, in Greek mythology, determine people’s destinies: Clotho spins the thread of destiny, Lachesis measures it, and Atropos cuts it when our time has come. With these three ancient characters, Baechler creates a contemporary dialogue, embroidered onto a see-through fabric piece of five meters long. The conversation revolves around current concerns, such as the climate and our dependency on technology. It also involves some personal stories and memories of the artist.

Baechler was also inspired by Seth Siegelaub (1941-2013), an American gallerist, curator & researcher who collected textile works. He wrote about the narrow link between textile and social history, and about how textile was one of the industries standing at the cradle of capitalism. The giant piece was created with a embroidery machine that normally operates at high speeds with 168 needles. The artist decided to use only one needle, giving the work a much more individual, patient touch. The font of the text was especially designed. With this method, and with the content of the text, she focuses on the process. At the end of the dialogue, Atropos transforms into Care and asks for “more modesty, humility, honesty and humanity!” With all this, Baechler counteracts the current customs of a textile industry that is increasingly focusing on large and fast production.