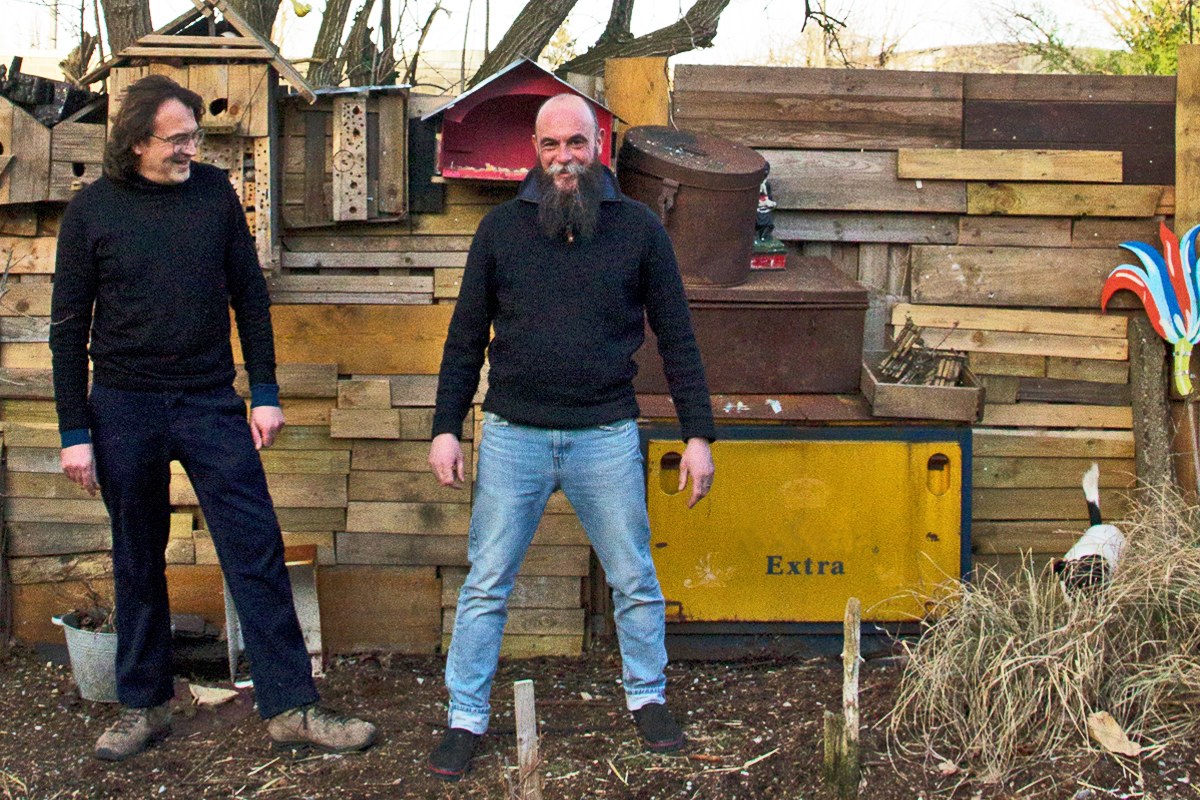 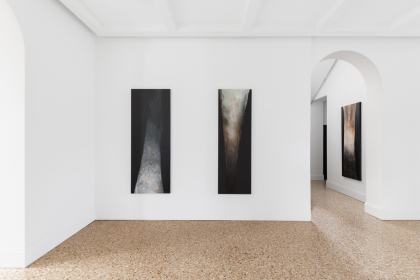 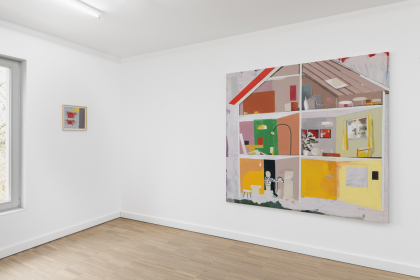 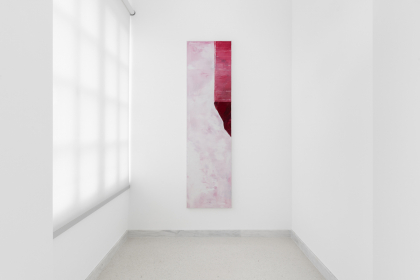 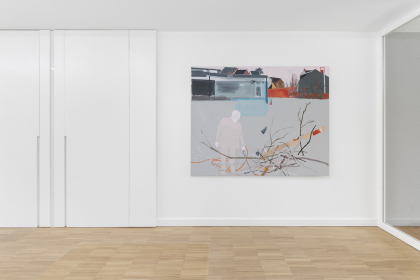 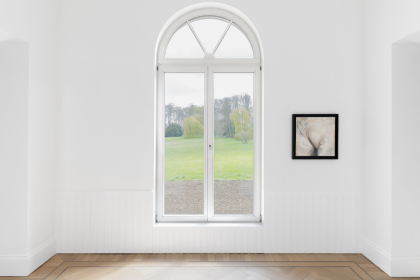 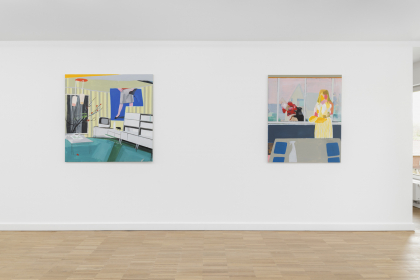 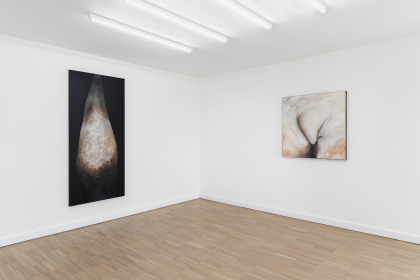 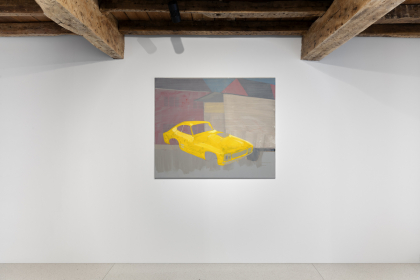 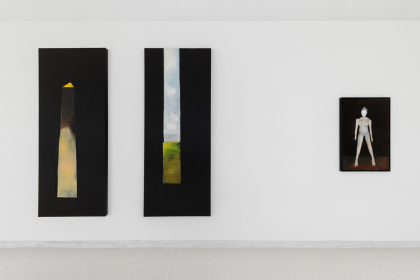 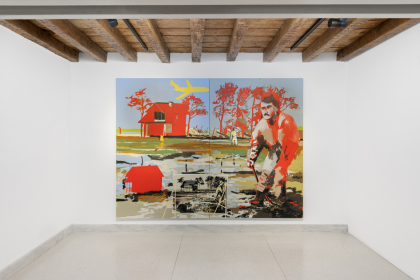 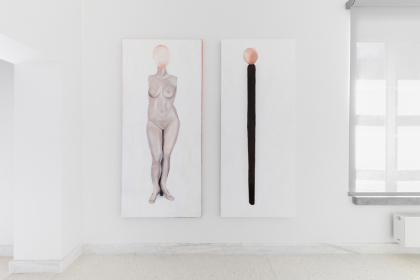 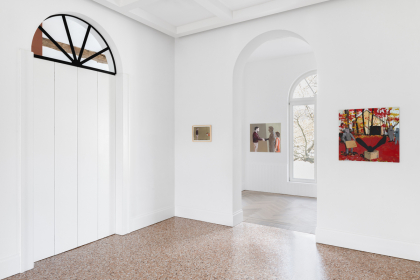 The exhibition ‘Let's Sing Another Song’ brings together two very different artists in a painterly dialogue, both on the cutting edge between figuration and abstraction, and each with a certain dose of reflection and humour.

Volckaert invites Thierry Grootaers (1974) to enter into a dialogue with his own work. Grootaers' paintings look very different: he works with bright, cheerful colours and a combination of figuration and abstract planes. He is interested in everyday scenes, such as interior views that radiate a homely atmosphere, but also allows human characters to enter the majority of his works. There is often a wittiness to them: they contain a wink, a joke, an unexpected element, or something that is not quite right.

The pleasure of painting is very clear with Grootaers. The pure, simple joy that drives him can be felt in every brushstroke, every colour area. The artist admits that he also enjoys the seemingly most banal things: preparing a canvas or painting a background. He works every day and always starts intuitively. While filling a colour plane, without any further plan, new ideas arise and he finds inspiration. The work develops by itself, the paint brings its own coincidences, little ‘accidents’ that guide the artist.

The vintage interiors, the collage-like juxtaposition of figures and background, the bright areas of colour – mainly red and yellow – are reminiscent of pop art. An important distinction, however, is the painterly gesture: the obvious brushstrokes that create a universe in thin but multiple layers, one on top of the other.

The characters who interact with each other or simply live in their own trusted environment - working in their garden, sitting at a table, dancing in the living room - breathe lightness. The images are harmonious, comfortable in their simplicity, satisfied and sometimes even downright optimistic. The work has a certain tenderness, in the way in which Grootaers allows his characters to lead a life of their own, but also in the winks he hides here and there; references to a film he saw, an inside joke that he shares with his own family, or – even more often – a reference to his own works. Sometimes the same character returns: there is one female figure, for example, that regularly seems to jump from scene to scene and from painting to painting.

There is no resentment or acrimony in the works, yet mystery does creep in here and there: in a subversive element or simply in a significant silence. An interior where the perspective is not quite right (Grootaers likes to mislead us in that regard) can also be very scary: a scene that awaits a crime, or that reminds us of terrifying interactions à la Lynch.

Sometimes he works again and again on the same canvas for years. On the back he always registers the date on which he works – a list that can span up to 15 years. Small or large gestures on the canvas are like a diary, records of small moments in life. They are inextricably linked to his personal memory and experience. These many reprises also make the previous lives of the canvas shine through in the surface: as the basis for the visible story, or as ghosts of a memory.

Grootaers paints figuratively, but also allows for a lot of imagination in intuitively chosen abstractions. For example, one part of an interior is left completely empty, or characters are not given a face. Some figures or objects remain a contour, and stand transparently against the background – phantoms that sharpen the sense of imagination and crank up the mystery. Moreover, these translucent factors cause foreground and background to merge and any sense of perspective to crumble.

It is in this reduction and in the abstract levelling of foreground and background that Volckaert and Grootaers meet each other. A comparison between the two artists is not quite relevant. They engage in a free dialogue, each in their own right, with their own methods, reflections and painterly arguments. They seem to be far apart, but every now and then their different rhythms do find a certain harmony.