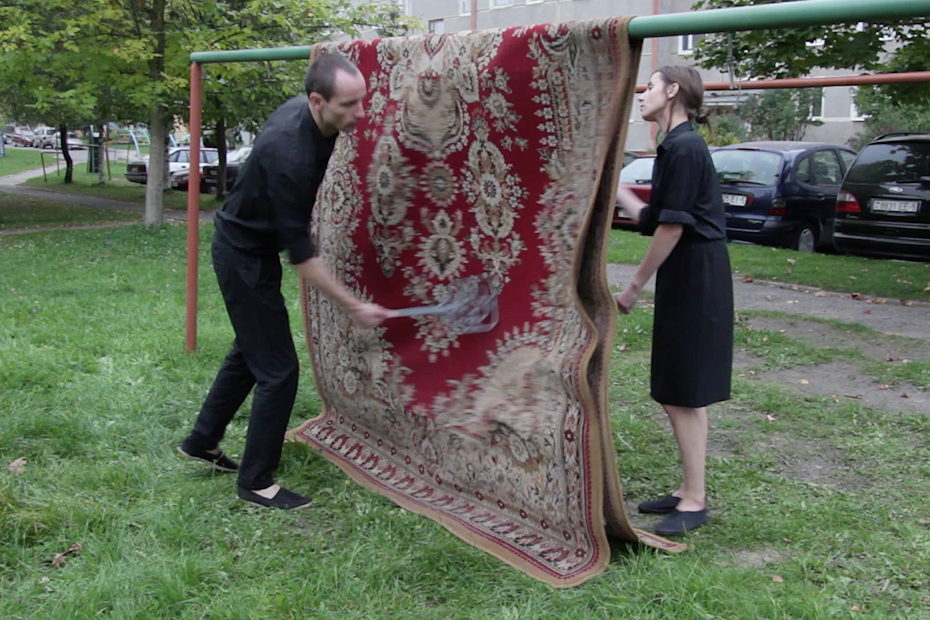 "From Where to When" shows the work of Marie-Fleur Lefebvre and Jura Shust. The exhibition can be read as a series of interlinked contradictions and dualities. Both artists raise socio-critical questions and present extremes to which no one can remain indifferent. The works reveal traces of transformations or allude to moments of transition. They emphasise their presence within a sort of continuum, while making it clear that there is no such thing as a fixed position. Everything appears to fall between different areas or conditions. Jura Shust draws upon rites of passage, the mechanism of conflicting positions of power and parallel worlds as a metaphor for an alternative reality. Marie-Fleur Lefebvre, on the other hand, employs deconstructive techniques to completely unravel objects, in order to arrive at works that reveal, quite literally, their different facets.

By working with highly contrasting colours and materials, Marie-Fleur Lefebvre indicates that meaning is created through difference. Nothing is unambiguous, and a balance is only created through deeply sensitive combinations of divergences. The work of Marie-Fleur Lefebvre is created in a very process-oriented and associative way. Like an archaeologist, she digs through materials in search of what might otherwise remain invisible. The objects are revealed in their entirety, as though life holds no further secrets for Marie-Fleur Lefebvre, but is accepted in all its beauty and ugliness. Her work also refers to life and death: as an inseparable duo, the faithful opposites whose only salvation is the presence of the other. And through the deconstruction of that which has just come into existence, the object embodies the transformation. It is an assemblage of gradations in which the goal – both because of, and despite, the deconstruction – remains a positive evolution.

The same affirmative stance and dedication is evident in the work of Jura Shust. He criticises social conventions out of his passionate belief that all people should be treated as equals. His work represents extremes – in the sense that it refers to specific notable events and actions, and sets out to capture the logic of the collective organism. He questions relationships of unequal power and the ways in which these are tackled. Rites of passage provide an escape from the everyday reality. The masses search for a spiritual outlet as an alternative to the presiding structure: a society in which poverty, social vulnerability and despair are camouflaged by the spectacle of wealth. This liminal state, which hovers between order and chaos, contains an important potential for change. In this way, Jura Shust offers a sort of intermediate position, a non-conformist alternative to the current binary system.